Gender Discrimination Laws in Relation to the Workplace

It's long been illegal to pay men and women different amounts for "substantially" equal work. But many employers are unsure about what constitutes pay discrimination in the eyes of courts and the EEOC — or how they can rectify pay disparities. Here are some answers to frequently asked questions about gender-based pay discrimination.

Laws and regulations governing gender-based pay equality have been on the books for decades. But equal pay for men and women has become a hot button in the business world, thanks to the #MeToo movement and some recent surveys documenting pay disparity.

Recent Equal Employment Opportunity Commission (EEOC) gender-based discrimination allegations suggest that many employers are unclear about what constitutes pay discrimination in the eyes of courts and regulators. While it can be a gray area, it's important to know the basics to help you assess your risk of an EEOC equal pay claim — and take preventive measures to protect your company and its employees.

The principal laws governing pay discrimination are:
• The Equal Pay Act of 1963 (EPA), and
• The Civil Rights Act of 1964.
The Age Discrimination in Employment Act of 1967 (ADEA) and the Americans with Disabilities Act (ADA) also can come into play in indirect pay discrimination cases with a gender element.
For example, an employer might set compensation for jobs predominantly held by women (or other "protected class" employees under the Civil Rights Act of 1964) below that suggested in an industry job evaluation study. Or an employer might maintain a neutral compensation policy that has an adverse impact on women that "cannot be justified as job-related and consistent with business necessity."

What Types of Pay Are Covered?

Under the EPA, "pay" refers to all forms of compensation, not just wages or salaries. Other categories can include:

Pay practices are examined for potential discrimination on a location-by-location basis. That means that, if you have an office in California and another in Kansas, you wouldn't be expected to maintain the same compensation scales for both. The issue is relative pay by location. However, workers at different sites "sometimes may be compared if the same managers oversee the operations of both locations and workers frequently transfer between the two locations," according to the EEOC. 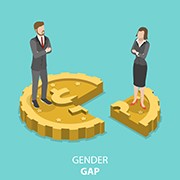 Some employers recognize pay disparities along gender lines. But then they fail to take remedial action. That was a point that the EEOC's acting chair stressed in a recent case involving a major university.

Female professors at the university's law school were paid, on average, nearly $20,000 less than male professors performing "substantially equal work under similar working conditions," according to the EEOC.

"Despite recognizing the significant pay disparity … the university failed to take corrective action by adjusting salaries of female professors," the EEOC stated in a summary of the case. "I hope cases like these get the attention of all employers and lead them to not only review their pay practices, but take action to address discrimination when they find it," said Acting Chair Victoria Lipnic.

What Qualifies as "Substantially" Equal?

The basic equal pay for equal work standard doesn't define "equal work" as a man and a woman doing precisely the same job or having the same title. Rather, their jobs must be "substantially" equal.

In addition to being at the same location or establishment, the following four criteria are taken into consideration.

A final way that an employer can get into hot water is by taking any action that might be viewed as retaliatory against an employee making a discrimination allegation.

For example, earlier this year, a janitorial services company settled a suit brought by the EEOC for $36,000. After a female employee complained about being paid less than a male counterpart for similar work and asked for a raise, she was assigned more work. She was also verbally harassed and eventually terminated. It's possible that the original discrimination charge might have been dismissed, if not for the retaliatory treatment she received after she alleged pay discrimination.

When it comes to gender pay discrimination, an ounce of prevention is worth a pound of cure. If you have doubts about whether your pay practices are up to snuff, please contact HR Consultants, Inc. 814-266-3818 or email .

Sign Up for “Business Matters Weekly”, our weekly newsletter for useful information about what’s going on across our region.

By submitting this form, you are granting: JARI, 245 Market Street, Johnstown, Pennsylvania, 15901, United States, https://www.jari.com permission to email you. You may unsubscribe via the link found at the bottom of every email. Emails are serviced by Constant Contact.