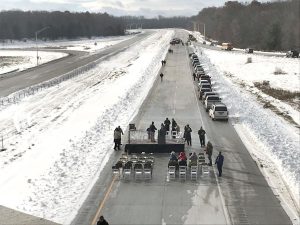 Cook is CEO and Chairman of Somerset Trust Co. and has been promoting completion of the Route 219 four-lanes for decades.
It hasn’t been easy, Cook and other leaders said during Wednesday’s program, held on the southbound lanes of the new highway just south of Somerset. He recalled a former state transportation secretary who was not in favor of the investment.
“He said it would be a cold day in hell when this was built,” Cook said on Wednesday.
Cook said it was a community effort to see the $330 million project that led to Wednesday’s opening of the 11-mile connection between Somerset and Meyersdale, but he and others at the ceremony said more needs to be done…
Ron Aldom, executive director of the Somerset County Chamber of Commerce, said Wednesday’s milestone is huge.
“There’s no question this is an historic day because this roadway will change the life of Somerset County,” Aldom said. “It will change the life of the people of Somerset.”
(read full article here)